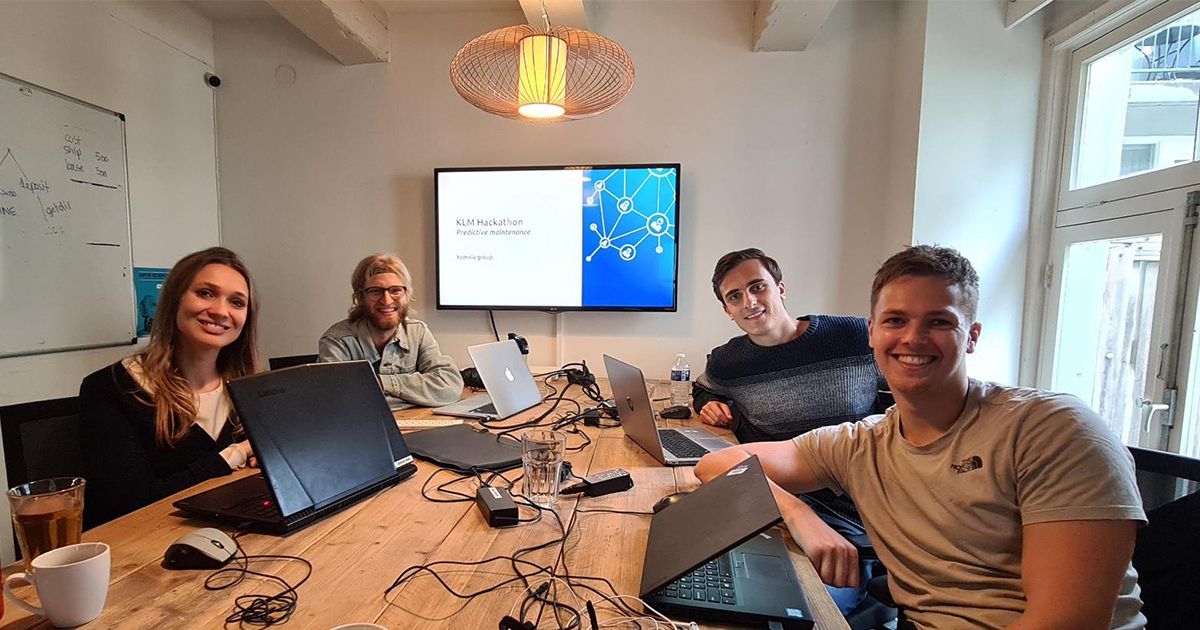 Four Xomnia machine learning engineers won a hackathon arranged by the Predictive Maintenance Team at KLM Royal Dutch Airlines, outperforming 5 other competing teams and delivering the best concept for a machine learning-based model that can predict failures in the bleed air system of a Boeing 737.

An airplane's bleed air system provides highly pressurized air to different components of the aircraft, helping with maintaining pressure in the cabin, as well as other systems that need highly pressured air. KLM already has a system to predict failures of the bleed air system, however its predictive maintenance team initiated this hackathon to open the door for creative ideas about how machine learning can be used to tackle this challenge.

The teams participating in the hackathon were given in-flight sensor data from the 4 different phases of every flight for a number of flights. Examples of this data included air temperature and air pressure of a specific component within the bleed air system. The teams were also given tables of data about historical failures.

“The challenges that our team focused on were selecting and engineering useful features from the sensor readings that have predictive power towards the failure labels, building a machine learning approach that maps the relationship between features and failure labels and lastly, reporting on our approach and findings,” said our Machine Learning Engineer Martijn Beeks.

For the data part, specific features were engineered that had a high correlation with failure events. These features both contained information about a specific event as well as spatial information to detect changing behavior over time. As for the reason that Xomnia’s model won, Martijn thinks that it is the fact that the team had a more data-centric rather than a model-centric approach, adding: “We mainly focused on the data aspect of the challenge by enriching the data based on obtained insights. This subsequently had its effects on the modeling part.”

In the modeling part, Xomnia’s team proposed an XGBoost classifier that could classify whether a bleed air system of a plane would fail in the coming 50 flights. The XGBoost classifier is a specific type of gradient boosting model that addresses overfitting behavior well when training on small datasets as in this case.

“We also provided an additional LSTM model, a recurrent neural network that takes the full spatial aspect of data into account. Normal models take event-based information, making it hard for a model to understand how data changes over time. Using the LSTM, we could take in a group of events at the same time, allowing the model to observe any specific patterns of change in the data. This makes it a lot easier for the model to recognize trends compared to an event based model,” the Machine Learning Engineer elaborated about the solution.

Xomnia’s winning team is set to present their solution to the management team at KLM in November 2021, and they will be awarded for their win.

“We benefited from Xomnia's way of working, where bright minds come together, share ideas and make sure that the job is done,” the Machine Learning Engineer concluded.

Content creator and passionate storyteller. On a mission to tell Xomnia's story to the most diverse and wide audience.
Written by